In many cultures, breaking bread is a gesture of peace. For the Bread Houses Network, making bread is the crucial first step. The bread house movement unites people from all walks of life through the simple act of baking. Organizers and participants say bread houses spark cross-cultural dialogues and enhance understanding among community members while bridging ethnic, cultural, racial, economic and religious divides. 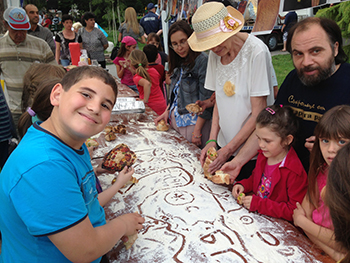 “The key mission we have is not culinary, it is community — to get people to simply understand that ultimately we are still human and shouldn’t focus so much on the different divisions between us,” said Nadezhda Savova, an anthropologist who got the notion to found the Bread Houses program while visiting Bethlehem in 2008. In Hebrew, Bethlehem means “house of bread.” 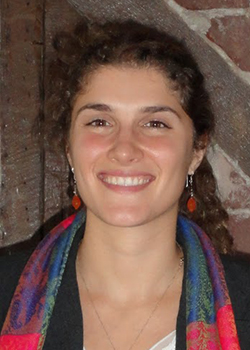 A native of Bulgaria, Savova said bread houses were never promoted as forums for solving local issues. But as the movement gained popularity, they became places where community members would discuss solutions to local issues and personal problems while making bread together. As interest grew and Savova trained more and more organizers, the movement quickly spread beyond Bulgaria, where the first bread house was launched in the abandoned house where her great-grandmother once lived.

Today bread houses can be found in 20 cities in more than 16 countries across Europe, Africa, Asia, North and South America, and Africa. The bread house movement consists mainly of two components: community centers, with regular hours and frequent workshops, and events that are held at least once a month at different locations. Some municipalities support the concept by donating buildings for the community centers, and rotating workshops have been run in schools, hospitals, parks, orphanages, businesses, homeless shelters and a refugee center. Savova and organizers in the United States also developed a Mobile Bread House in New Jersey. In 2013, nearly 8,000 people participated in bread house events around the world.

“Bread, it turns out, is a good muse for people,” Savova said.

On any given night, a baking event brings together a wide variety of community members: businesspeople and the unemployed, professors and students, families and homeless people, the elderly and orphans, people with various medical challenges, and even corporations seeking team-building and stress-reduction programs for their employees. Participants work together, making not only bread, but also art. This includes poetry, visual arts, music and, almost always, the “Theatre of Crumbs,” in which participants shape dough into puppets that play roles in issues facing the community. People improvise as they introduce their creations and discuss issues. In the end, the puppets are shared as bread.
“The idea of Theatre of Crumbs is that we are all the crumbs of one loaf,” Savova said. “The whole experience is deeply emotional and inspiring for all ages, and the final result is that, indeed, all feel part of the same play.”

The dough, the art, the aroma, the warmth of the ovens — it all has a purpose, Savova said.

“Even if people just come skeptically and look around, immediately you can get them into the action — that is the key to integration,” she said. “If you get them doing something, they will stay. And their boundaries will break down as they work, share their stories and learn about each other.”

As the bread house movement has attracted more and more people, organizers have adopted a guiding catchphrase: “We are all made of the same dough — and it is the human dough.”

Silvia Nedelcheva, who runs one of two bread houses in Gabrovo, Bulgaria, said organizers aim to create hubs for “people who might never have the chance to meet because they are either from very different economic classes, or isolated in their institutions, or at home because of their disability.”

Medical clinics, nursing homes and retirement centers also encourage participation in bread house events as a form of therapy to help people overcome barriers or deal with difficult issues. Savova recalled an elderly man from a Bulgarian mental health clinic who worked on a project molding dough into puppets.

“He had made a really sad face, and because the bread rises and changes its shape when it bakes, the puppet came out smiling,” she said. “He was really happy, and his doctors told us he couldn’t stop talking about it for days.”

Another participant, a domestic violence victim from Plovdiv, Bulgaria, said bread house workshops not only helped her cope with emotional issues but gave her the strength to strike out on her own. In a letter to organizers, she wrote:

“I was desperate and I had no direction. I did not have the courage to think of life improvements or turning a new page in my life. Baking therapy gave me more confidence and self-esteem to make responsible decisions. … Thanks to the talks and discussions during our meetings, I thought about the different stages of my life. It helped me a lot! Finally, I took the decision to buy my own home. All of my life I lived in rented space.”

“Bread houses are a wonderful illustration of Mott’s community engagement objective,” she said. “They are the result of grassroots self-organizing by citizens who want to improve their community’s social inclusion and inter-ethnic and inter-generational exchange, as well as local civic initiatives.”

Before launching the Bread Houses Network, Savova had been to 77 countries to conduct research for her Ph.D. in community cultural centers and the role of community arts in social transformation. But it wasn’t until December 2009, when the roof caved in on her great-grandmother’s house in Gabrovo, that she decided to try out the bread house idea that came to her in Bethlehem. As she contemplated fixing the house, she thought, “Maybe we should have a nice community cultural center where people come together to make bread.” Community members embraced the idea. With donated materials and volunteer labor, they converted the dilapidated home into the first bread house, a model for others to come, with a theatrical theme and artistic atmosphere.

“What I saw first in my grandmother’s house was that people were really hungry for very simple relationships,” said Savova, who was named a 2012 National Geographic Traveler of the Year. “It was very clear to me: There is a hunger in society, a hunger among people, and it is not for bread — it is for the relationships that it generates. ”