In addition to encouraging innovative engagement in dozens of communities around the world, the bread house movement attracts a wide variety of dedicated organizers. Bulgarian native Silvia Nedelcheva is an example of someone who left her country after college but returned, determined to make a difference. Nedelcheva had moved to Italy, where she was a teacher’s assistant for students with learning disabilities. Longing to work in the arts and connect with people in need, Nedelcheva moved back to Bulgaria in 2001 after meeting with Bread Houses Network founder Nadezhda Savova, whom she credits with inspiring others like her to return to the country. An artist and inveterate volunteer, Nedelcheva runs a bread house in Gabrovo and serves as a member of the Youth Advisory Council (YAC) for the mayor’s office. She called the bread house her “dream workplace.” 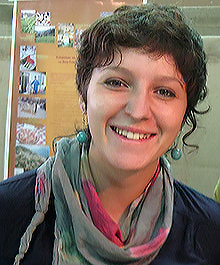 Mott: How have bread houses benefited your community in ways that might not have happened otherwise?

Nedelcheva: Many different people regularly come together to take part in our community bread-making sessions. One example is children from the local orphanage and various other locals. We had multiple meetings of local, well-off families with these children, and the unplanned result was that one family decided to adopt one girl and take care of her despite already having children! If it had not been for the bread house, these people would have never met, let alone had the chance to interact in such an informal, entertaining, but also very sincere and open way.

Another story that deeply touched me recently is about a boy with mental disabilities whose parents try hard to find him friends and integrate him into society. In the bread house, they found a place to help him feel accepted around diverse people. The boy loves to play basketball, but he usually only plays with his father because his peers scorn him and do not accept him. Recently, at one of our events, the boy met a family in which the wife is a basketball judge and her husband and older son — who is the age of the boy — turned out to be basketball coaches! I cannot describe the joy of the boy when they invited him to take part in their trainings, meet the team, and learn all the rules in the most professional way! The boy almost jumped like a basketball from his chair! From now on, he will have real and regular opportunities to interact in a new way with his peers and be even more accepted in society.

Mott: What are some of the challenges in your community?

Nedelcheva: In the past 25 years, with the transition from socialism, the Bulgarian people have undergone a series of crises — from economic to social — resulting in individual and psychological traumas. Bulgaria also suffers a huge problem with the emigration of young people, and we seek to inspire more and more people to come back, the way I came back.

Mott: How would you characterize the impact the bread houses have had on the community?

Nedelcheva: At the bread houses, people exchange ideas, cooperate, and give each other support to find self-confidence. They start small community initiatives, like cleaning our little park in front of the bread house, planning the construction of a children’s playground, and others. What is very important is that people who have had very difficult and miserable lives have a chance to connect to beauty; to create with others; to talk about metaphors and poetry, about life and its meaning.

What I find personally touching and inspiring, as well as surprising, is that people think of the bread houses as the right environment to share their very personal pains and tragedies. Once, we had an old woman in the community whom we had met only once during a baking session. She came to the bread house crying, and she said she had recently lost her husband and had no one to talk to. She felt the bread house was the place where she could share and feel at home, with a company of people who, even as strangers, felt close to her — perhaps precisely due to the unique environment that the wood-fired oven and the bread aroma create.

Mott: The bread houses seem to inspire people to give to the community in new ways.

Nedelcheva: I am surprised how the bread house becomes the occasion for various people to donate who had never donated before. In our case, they see exactly where their money goes, whom they serve, what we have bought. And we realized that we inspire new ways of giving, which in Bulgaria are not developed or popular.

Mott: Why did you get involved?

Nedelcheva: I wanted dynamic and inspiring work that creates beauty and something good in society by giving people the chance to express themselves. I wanted to contribute whatever I could to help the bread houses “fill the world with the aroma of peace,” as we like to say! There are so many people who are inspired by Nadezhda Savova’s example of someone who came back and is doing something good in a simple but innovative way.

Mott: What is your role there?

Nedelcheva: I am responsible for organizing the events at the bread house, which include various types of community, cultural and social/therapeutic activities. On the one hand, I organize big community events with diverse themes, from bread and music to bread and poetry and theater, where people from all walks of life come and participate. On the other hand, I organize smaller sessions for people with disabilities that function as therapy for them. I often lead the therapy sessions in the centers and hospitals where these people stay during the day. I also attract volunteers, take care of all administrative documents, and promote the social value of our products and services. 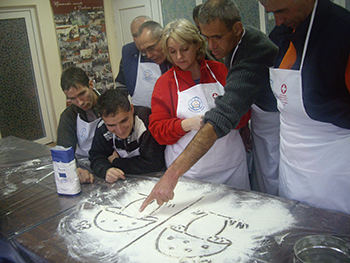 Men with mental disabilities use flour to create art.

Mott: I understand there are other projects you are undertaking within the bread house movement.

Nedelcheva: I am currently involved with the development of our social-enterprise bakery in Gabrovo, a real commercial bakery that we opened in October 2013. At the bakery, we train three orphans who are 18 or older to become bakers and community workshop facilitators. I spend time with them talking about their lives and personal problems.

My education is in sculpture and wood carving, so one thing I love in particular about our work at the bakery is that we try to revive forgotten, old traditions of baking — using sourdough instead of commercial yeast, the ways to build wood-fired ovens, and the wood carvings of traditional bread stamps used for the Bulgarian and Orthodox Christian holidays. We will soon start organizing trainings in these old crafts.

Also, I am now working to develop the bread houses as part of cultural tourism here.

Mott: Why do you think bread houses have made such an impact?

Nedelcheva: Because the idea is so simple, real, true, so widely applicable. Most important, it is accessible to anyone. Everything we do ultimately teaches goodness, equality, giving, respect and love!