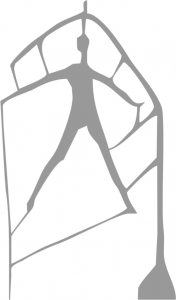 The first and most internationally widespread method of the Bread Houses Network is the innovative form of bread puppet theater called “Theater of Crumbs”. The logo of the Theater of Crumbs was developed by local Gabrovo sculptor Kalin Koichev, who drafted it based on a model teaching students of sculpture how to make and bake bronze statues, building the channels through which to fill the figure with substance. It is a metaphor of the ways the strings of the puppet can both control it but also help it move and thus develop its own character and “substance” – this is the potential of any actor or citizen, and each citizen as a part of the whole of society: a crumb part of the whole bread.

The Theater of Crumbs started with a volunteer-run puppet theater group at the first Bread House in the town of Gabrovo, Bulgaria, and the distinctive element of the performances the group has so far staged engages the audience to make bread during the performance with the fire oven serving as a background prop, where the stage is literally hanging in the air perched on top of big beams 3 meters up above the space with the fire oven and the bread-making table: the puppets are hanging from the “stage in the air” and down above the table sometimes walking on it and among the “audience”, while at the same time the “audience” of 10-20 people maximum is sitting around it and making and baking the bread. The plays are interactive and address local issues in entertaining ways that inspire the audience to engage and try to solve serious local issues with the tools of satire and comedy as they can suggest at any time to the actors how the plot should evolve.

The Theater of Crumbs can be well used with Boal’s methods, but it is also unique, because it offers a multi-sensorial experience: touch, taste, smell, the elements of the puppets and of food (bread in particular) sharing. Both methods can be used to help people transform their communities and imagine solutions for larger social issues by seeing the problems from a different perspective through the amusing but also analytical tools of theater and story-telling. In the Theater of Crumbs, the culmination is that these become the most delicious of all performances, where the bread puppets are ultimately shared and build bridges among all participants, who are at first strangers coming from very different social background and diverse disadvantaged groups – at the end, however, they all feel as a family.

Because what is the one things that when broken apart can bring a family closer together? Without doubt, bread!

Theater of Crumbs at the Bread House in Veliko Tarnovo, Bulgaria

July 1st (2016) was a wonderful Friday, when I took to the Bread House in Veliko Turnovo my sister who had just returned from Sweden. I had read in the local newspaper about the workshops that took place in the cultural center (what the Bread House really is) and I was truly interested to know what was happening there. In the Bread House, we met a 4-year-old girl called Grace who had been visiting the workshops for several days. The day began with the visit of an adult couple who presented their art – they twined maize leaves and made different beautiful things out of it.

Our activities began with Theatre of the Crumbs where we tried to draw figures with our fingers on a flour-sprinkled table. As a result we created beautiful and unique fairytale characters or just ones we had made up at the moment. There were the Little Prince with his rose, Pippi the Long Stockings, Rapunzel who was locked in a castle, a magician who puts spell on or disenchants all of the fairytale heroes. We were expected to tell each other a long story in which we had to include all of the characters, which we had drawn. Then our small group made out from dough their first round pieces of bread, after that we baked them and in the end we had together – adults and children – a delicious lunch.

The second part continued with hand-making of traditional ritual bread under the guidance of a well-known volunteer of the Bread House – an enthusiastic and full of positive energy 73-year-old woman called aunt Kinche. She told the guests and the journalists about the past times when she was young, about the specifics of making bread, the rituals and symbols concerning the bread decoration. Aunt Kinche passed her energy and enthusiasm on all the participants – children and adults together tried to make their own ritual round pieces of bread and to decorate them. While the bustle and creative atmosphere was going on, a dad with a small boy joined us. Later we were surprised to find out that they lived in Sidney, Australia, and had been on a visit to their relatives in Veliko Turnovo.

Thus, bit by bit, with the benevolent help of our silver-tongued story-teller and our small team, we managed to make two round pieces of bread decorated with wheat ears, a sun, a grape cluster, a cross and different small figures, which we had to take the other day to the Bread fest in the village of Ressen.

It was really a wonderful and truly beneficial day, and all of us were relaxed and smiling widely as the sunset approached!