(“psycha”, in Greek = the soft interior of the bread; it reminds of “psyche”, which means “soul” and, therefore, of “psychotherapy”, healing the soul)

HEELING THE WORLD…crumb by crumb!

(“heel” = the part of the hand with which we knead dough; the end crust of the bread loaf) 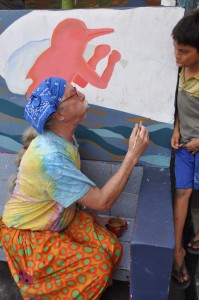 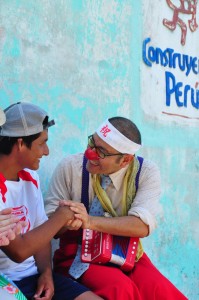 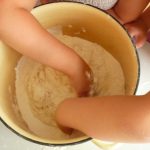 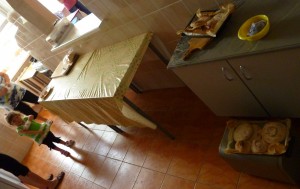 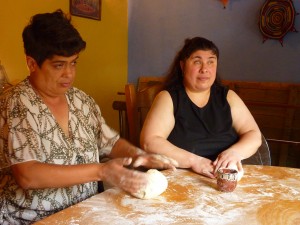 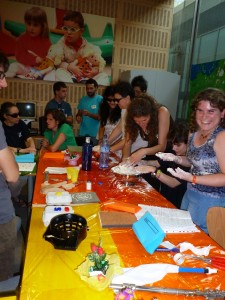 Application of the Bread Method for sight-impaired people with the National Association of the Blind, Barcelona, Spain (July 2011)

The Bread Therapy Method  (visit our specialized site www.breadtherapy.net ) were first invented and tested by Dr. Nadezhda Savova in community baking with people with various disabilities and later evolved as proven art therapy methods in our work with social workers and psychologists and workshops with various groups in need of therapy.

The methods are based on inspiring doctors and their patients to come and make, bake, and break bread together as a way to build trust and bonds between them as well as a sense of home and warmth in the usually depressing hospital settings.

Nadezhda developed the Bread Therapy Method while working with humor therapy expert Patch Adams. Nadezhda and Patch were invited for a global conference and workshop in Iquitos, Peru, by the World Health Organization as experts on creative community arts interventions to develop a set of proposals and innovative agenda on how the arts can serve as a bridge towards healthcare, both at the preventive and therapeutic level. While working with other artists, scholars, and doctors from around the world, Nadezhda developed the concept of Bread Therapy in hospitals, offering an intriguing new element to the alternative medicinal practices of aroma therapy by introducing the hot bread aroma, which is certainly one of the most beloved smell across cultures and invariably producing in people associations with and sensations of home, even, intriguingly, among people who have never had the experience of bread being baked at home! This paradox of what Nadezhda calls the “non-memory” of bread as a powerful cultural symbol testifies to bread’s power to transcend cultures and classes as a universal language.

Furthermore, as in the conventional art therapy approaches, it is key for the hands to be involved, and the way this has been done so far with clay or wool or petting animal – as in the therapy through patients interacting with donkeys promoted by Michele, the coordinator of Slow Food and the Bread House in Southern Italy in Puglia (close to Bari) – the tactile experience of touching dough is, as many patients argue, the most pleasant touch in the world!

Bread is a unique therapy because of the psychological experience already explored by psychologists and psychotherapists with food preparation in general showing how consuming the labor of one’s hands creates an unparalleled sense of self-esteem and confidence, and with bread in particular it unlocks in most people their latent creative potential and aspirations towards beauty as many naturally start artistically shaping and decorating the bread, which I further teach them to do according to various world cultures and their traditional breads, songs, dances, crafts, stories, etc.

The Bread Therapy Method was tested and proven successful in:

Moscow, Russia (2010): National Russian Children’s Hospital (RDKB), doctors and their patients and their parents making bread together and bringing other wards to join

Barcelona, Spain (2011): National Association of the Blind (ONCE) employing Bread Therapy as a method to stimulate tactile experiences and provides a unique site for interaction with people from all walks of life and physical or mental disabilities (special abilities).