Between the 13th and 16th of December the Bread Houses Network took part in the final evaluation meeting in Skopje, North Macedonia to reflect on the achievements and the moments for improvement of the Erasmus Plus co-funded program: DIVE 3: Zero to One > 1 to N, a collaboration between 12 countries on 3 continents. The focus of the program has been to explore how cross sectorial partnerships can enable a thriving environment for social enterprises. 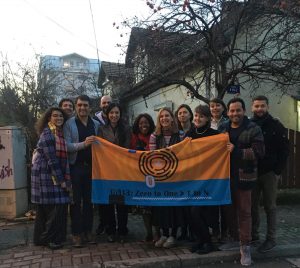 In order to gain more understanding about SE, the project incorporated several types of activities in the partnering countries: study visits in Slovenia and South Africa, job shadowing in Nicaragua, Costa Rica and Peru, implementation of 12 national events in every country and a final conference in Skopje, NM. Here’s how the Bread Houses contributed to the bigger understanding of SE in Bulgaria.

As part of the implementation of the national events in Bulgaria we conducted 5 debates, 3 workshops and 2 round tables. With the debates we wanted to start raising awareness about SE and its local status. For this purpose we invited representatives of NGOs and SEs like Caritas Bulgaria, Multi Kulti collective, Food not bombs, Foundation for social development and inclusion and academics from Plovdiv University. With them we dived in topics that aimed to define the SE and its role in cultural exchange and inclusion; what motivates and inspires SEntrepreneurs despite the numerous challenges; what are the main vulnerable groups of the Bulgarian society and how they could be socially included through SE and what are the 3 most important factors for sustainability of a social enterprise. The major conclusions reached were that social causes should be popularized and promoted more on media like TV news if people are to realize that there are such opportunities. Also, if the cause is valuable enough it will self-reproduce by engaging more and more people willing to develop the idea. Another conclusion is the importance of the business participation so that the effect can be spread to more users. Good examples for the Bulgarian reality are companies like Telus International and Experian. Sustainability can be achieved by developing a strong business model behind the SE, including effective ways how to get the message/idea through and to have realistic goal at the beginning of the enterprise.

After we framed the idea of SE during the discussions, we aimed a more practical approach with the workshops where students from different high schools were engaged in the creative process of building their own SE following the steps of our innovative game Bakers without borders. Youth is the main focus of the project so it was very important to have their opinion and orientation in the topic. Most of the students were already well acquainted with the idea of SE so having hands on practical tasks turned out to be more than exciting and beneficial. They collaborated in groups to agree on heavy social issues and how to solve them through the creation of SE. Their ideas were fresh , although not very realistic.

The highlights of the national events were the round tables where we tried to approach directly the question about cross-sectorial collaboration and its role in relieving youth unemployment. Based on the issued raised during the debates we wanted to invite the participants to share their ideas on how different sectors in Bulgaria can collaborate for a better social and job environment. Our invitation was accepted by the Municipalities of Sofia and Varna, Telus International, SE and NGOs like Concordia Bulgaria, Biodiversity, The Social tea house, Higher school of management, Institute for enterprise, sustainability and innovation, Center for sustainable social development and others. 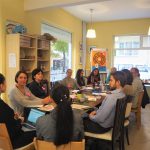 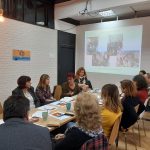 Except for the great opportunity different sectors to sit together and discuss possible cooperation, another very important outcome was delivered. Namely, the need for the creation of an Academy for SE where social entrepreneurs or anyone who wants to develop as such to attend sessions and educate themselves, exchange experience, network and look for opportunities in the field. This idea was liked by everyone and is in the process of more precise formulation and elaboration. It was proposed by the business part (Telus International) which already funds numerous social projects.

Also, more practical and concrete conclusions/recommendations were made:

Whether the created enthusiasm and ideas will hold ground is about to be seen but one thing was achieved for sure: to move the waters and stimulate different sectors to turn more to each other with the realization that only together we can reach higher.